Why Everyone Is Freaking TF Out Over Alabama

Why Everyone Is Freaking TF Out Over Alabama

Guess what, guys? For the first time in 2017, we’re here to report GOOD news about something POLITICAL. Unheard of, right? Well buckle up, because 2018 is coming and it might not be the apocalyptic wasteland we were all fearing.

Last night, in a move that many hoped for but few belief possible, Alabama elected a democratic senator for the first time in twenty-five years. Doug Jones will be filling the seat vacated by Jeff Sessions instead of Roy Moore, a boy who( allegedly) dates fourteen-year-old girls and still procured the endorsement of the RNC and President of the United States. 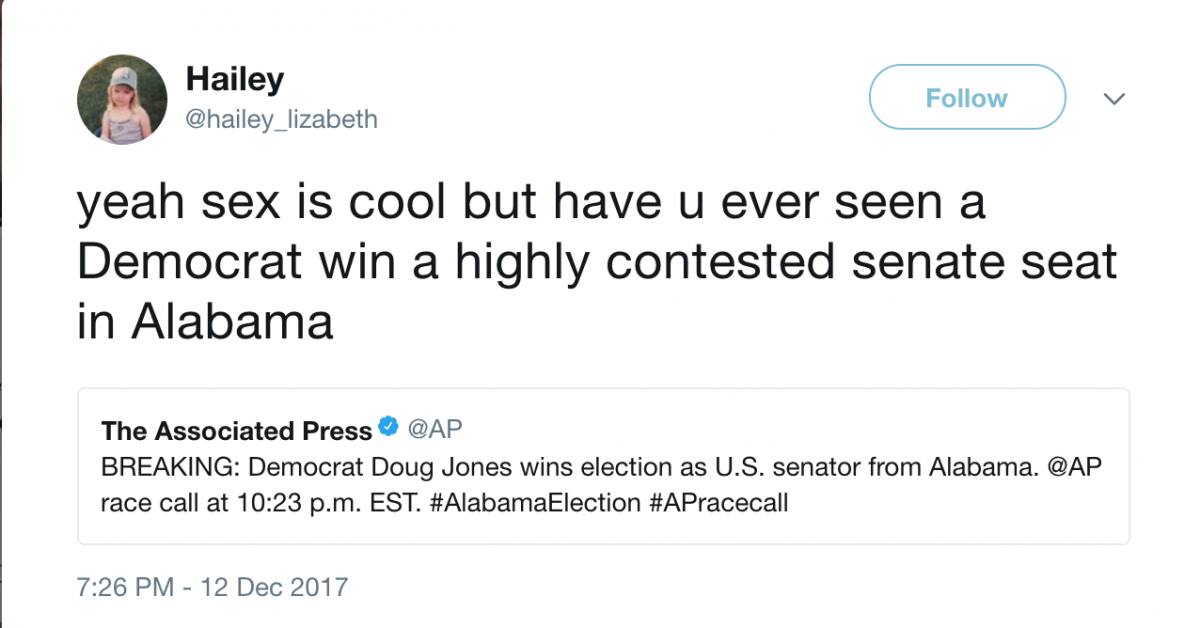 Alabama. A democrat. Can you believe it? Sure, all it took was for the Republican option to be an openly anti-Semitic, racist, child-predator, but let’s just take a win where we can get one, okay? I think we all have to become Alabama football fans now, but frankly that’s a trade I’m willing to induce to keep child molesters out of the Senate. Roll Tide.

Who Do We Have To Thank For Roy Moore Taking An L?

Black people, who showed up to the polls and saved America’s ass yet again, despite strives by Republicans to deter them. Black women in particular deserve your thanks today, as 97% of them voting in favour Jones, as reject the 63% of white women who voted for Moore. @white dames, let’s do better, yeah?

This is an specially large-scale jolt for Trump and his greasy puppeteer Steve Bannon, who were counting on Moore’s vote in the Senate to pass atrocious parliament like the GOP tax reform. But now with the GOP majority down to just one vote, some are viewing this as a turning point, a beacon of what’s to come in the mid-term elections next year. If Alabama can elect a Democrat, literally anything can happen.

What is this unfamiliar impression in my chest? Is it…hope? Will it last? Will I drown it in wine the next time the President tweets? Merely time will tell.

Heads up, you need to keep up with the news. It’s not cute anymore. That’s why we’ve made a 5x weekly newsletter called The ‘Sup that will explain all the news of the week in a hilarious af lane. Because if we weren’t laughing, we’d be screaming. Sign up for The ‘Sup now !