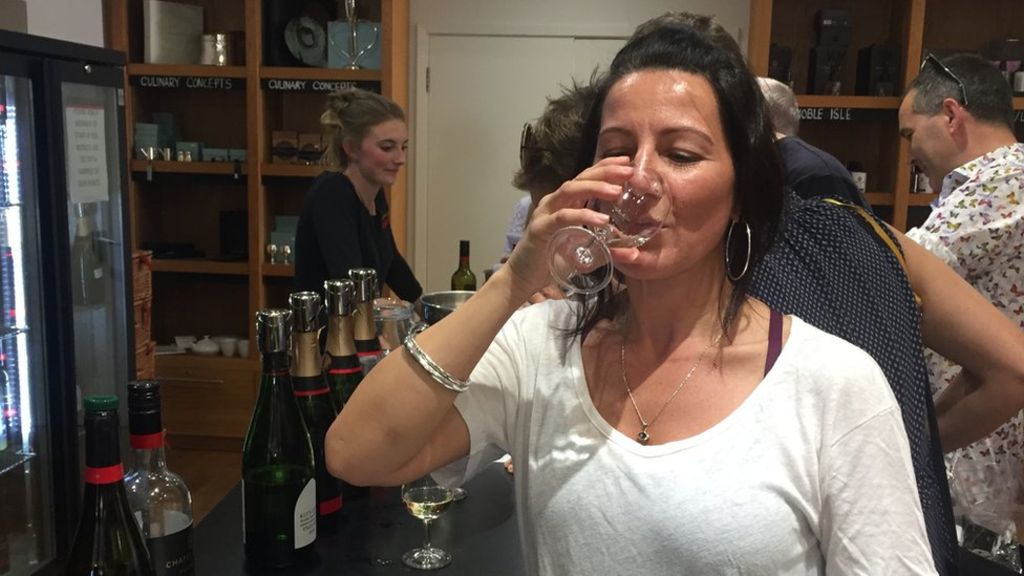 France, Italy and Spain are some of the world’s best known wine making countries but could a growing English wine stimulating industry ever threaten their predominance?

At English winemaker Chapel Down the opinions of a group of sightseers sampling the various wines it makes are mixed.

She says Canadians are open to booze wines from around the world, but she wouldn’t buy this variety.

However, Andrew from Adelaide has tried the Bacchus 2016 white and says it “compares quite well” to wines he’s used to back in South Australia.

Beatrice Ness, a teach from Paris, has sampled a effervescent assortment, arguably what the Kent-based vineyard is best known for, and is clearly impressed.

“We buy a lot of foreign wines in Paris and I envision people would go for this.”

It’s no secret that English wine-making has taken off over the last decade, with industry sales reaching a record PS130m.

However, while around four to five million bottles are rendered each year, less is said about UK exportations, which stood at merely 250,000 in 2015, the most recent time for which figures are available.

Despite the smaller scale of domestic exports industry, its reaching is develop.

With more UK land being used for grape growing, and the industry targeting exports of 2.5 million bottles by 2020, could the country be on track to becoming a serious wine producer on the world stage?

He says the firm has realized “consistent growth” over the last seven years and is tapping a wider range of marketplaces, from North America to South East Asia.

Like most English winemakers, the majority of his exports are of sparkling wines, which account for only over half of the firm’s production.

But he points out that exports are only a “part of the story” and the firm is still largely focused on the UK, one of the world’s biggest wine markets.

“In the rest of the world there is potential but you need a dosage of realism, ” he says. “It took the French 350 years to export 50% of their champagne and the UK is their largest market.”

Producers tend to see certain international markets as better bets than others, preferring places that like wine but don’t have huge domestic industries of their own.

France, Italy and Spain are “hard work”, says Bob Lindo, who founded the Cornish winery Camel Valley with his wife Annie in 1989.

But countries such as Japan, China and the US, which is his biggest marketplace, buy much more.

“We are sold in 23 US nations now, ” Mr Lindo says. “There are a lot of parts of America that don’t develop wine and there’s a very enthusiastic wine culture.”

Helpfully, English wine has shed its once negative reputation and is doing well in major rivals such as the Euposia International Challenge( Bollicine del Mondo) in Italy, which attracts sparkling wines from around the world.

Organiser Carlo Rossi says English brands regularly construct the top 10 in various categories, with wine producers Nyetimber, Hambledon and Camel Valley all having won ambers in the recent past.

“About 10 years ago it seemed a joke that the English could construct excellent sparkling wine, but there has been a surge in interest, ” he says.

He notes how countries such as France play on the fact they are associated with rendering fantastic meat and guzzle, “so we buy French, even their lager which isn’t actually that good”.

“So England needs to sell itself as a better quality producer of food and sip, which it still doesn’t do well enough and wine can be a flag-bearer.”

Not everyone is convinced about English wine, though.

Malcolm Gluck, a British wine critic who has penned numerous books, says there is a “marvellous conspiracy” among winemakers and novelists to feign English wine is great.

“There are English wines that are interesting that cost PS12-15, ” he adds. “But they expensed two to three times more than comparable wines from South America or France, Italy and Spain.”

There are other barriers to building a world-beating wine industry, including a shortage of land suitable for grape developing and high set-up costs.

The English climate likewise restriction production mainly to the south of England, although rather perversely, things could improve in that respect because of global warming.

A study last year by climatologists at UCL recommended rising temperatures and rainfall could let vineyards thrive as far north as Elgin near Inverness by 2100.

More from the BBC’s series taking an international perspective on trade :P TAGEND

Is time up for plain vanilla flavour ice creams ?~ ATAGEND

Camel Valley’s Mr Lindo belief exports are on the rise gradually as the reputation of English wine flourishes but he’s not chasing them. He says he is busy enough catering to eateries and supermarkets up and down the UK.

He also thinks we should not judge the industry’s success by its scale.

“A lot of City fund is going into English wine and there is a risk it will become too commercialised, ” he says.

“You have to be really committed to run a vineyard, but if world markets gets flooded, producers who have been here from the beginning will suffer.

“There’s likewise been a lot of cooperation between English producers and I don’t want it to stop.”